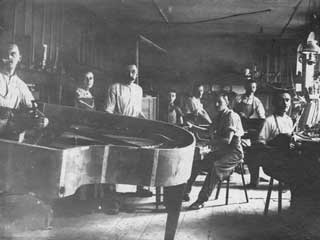 Established by Mr. Stefan Lung (1876-1954) and Ms. Auguste Lung (1883-1966) in 1883. In 1890, Mr. Stefan Lung studied piano manufacturing in Brüder Mikula piano factory. Later, he finished his apprenticeship from Öser und Wirth, a famous musical instrument manufacturing factory in Vienna, Austria. He then successfully completed his master’s exam.
In 1910 the very first frames and cabinets were built in a flat of the 6th district of Vienna. Within the same year, shortly after moving to the Ägidigasse no.6 in the same district, the first pianos were produced. After merging with Johann Wendl the company Wendl & Lung was recorded in the commercial register. 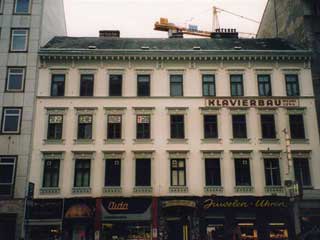 Born in 1912 as the only child of Stefan Lung, Stefanie (married name Veletzky) studied piano making and achieved her trade title as pianomasterbuilder, an extraordinary achievement for a woman at the time. In the Austrian piano-building history Stefanie Veletzky was second only to Nanette Streicher who achieved this title in the 19th century.

The pianos of Wendl & Lung were distributed throughout the whole of Europe and the near east. The “Wendl & Lung Model X”, with a mere 147 cm, was the most popular of the grand models and well known for its astonishing full and rich sound. This quality feature can still be found today on all the Wendl & Lung models.

At the time of World War II, although the chaos of the world pattern affected the development of many production industries, the piano industry still developed. Bösendorfer of Austria, Steinway of Germany and “Wendl & Lung” of Vienna still ranked at the top of famous piano sellers. Unfortunately, Anton Veletzky of “Wendl & Lung” family did not survive World War II. Stefanie and her two sons, Alexander and Anton, insisted on the piano manufacturing spirit of the “Wendl & Lung” brand and endeavored to expand and operate the well-known piano brand from 1954 when her father passed. 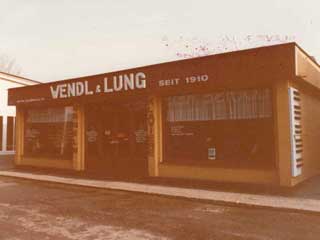 Stefanie Veletzky’s son, piano master-builder Alexander Veletzky (1933-), was the president of the federal guild for producers of musical instruments. As acknowledgement of his life-long achievements, including the restoration of historically valuable pianos for diverse Museums, Alexander Veletzky received the “Golden merit of order” from the city of Vienna. He acted as president of Austrian Piano Manufacturing Association until his retirement. Therefore quality professionalism and trust of “Wendl & Lung” won a good reputation in its industry thanks to the authoritative position held by Alexander Veletzky in the piano field. 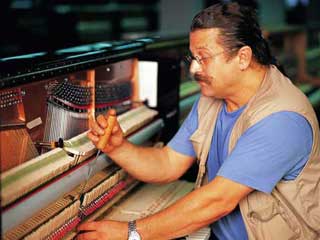 Alexanders’ son, Peter Veletzky, now represents the 4th generation of Wendl & Lung. At the age of 22 he became the youngest ever piano master-builder in Austria. In 1994 he took over the family business. Wendl & Lung pianos excel in quality and sound even when compared to other leading piano makers. As an added control and quality mechanism, the whole production process takes place under the direct observation of Peter Veletzky and his team of piano technicians.